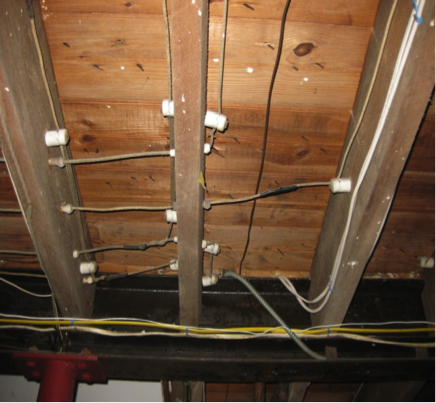 Knob & Tube Wiring: Does your older home have it, and what can you do?

Knob-and-tube wiring (K&T) was an early method of wiring in buildings in common use in North America from about 1880 to the 1940s. The system is considered both obsolete and a safety hazard.

Electricity is a powerful and potentially destructive force. We bring it into our buildings to do work. We do our best to tame and control it, but are never 100% successful. Even a properly installed modern wiring system built today has some level of risk associated with it. That level of risk increases greatly if the system contains even a small amount of K&T wiring. We can reduce, but not eliminate risk associated with a K&T system if it is minimized and modified by a licensed professional electrician that is familiar with this very old wiring method.

K&T wiring consists of insulated copper conductors passing through drilled holes in wood framing via protective porcelain insulating tubes. The conductors are supported along their length by porcelain knobs nailed or screwed to the wooden structural components of a building. Where wires enter a wiring device, such as a lamp or switch, or where pulled into a wall, they are protected by flexible cloth or rubber insulation called “loom.”

hollow spaces of walls, ceilings and attics where such spaces are insulated by loose, rolled or foamed-in-place insulating material that envelops the conductors.

Local jurisdictions may or may not adopt the NEC’s requirement. 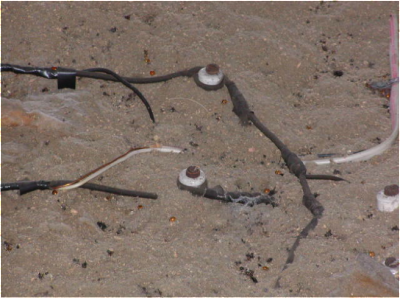 When K&T wiring was first introduced, common household electrical appliances were limited to little more than toasters, tea kettles, coffee percolators and clothes irons. These systems often served only a single light bulb in most but not all rooms of a home. The electrical requirements of mid- to late-20th century homes could not have been foreseen during the late 18th century. Existing K&T systems are notorious for modifications made in an attempt to match the increasing number of electrical devices and current flow required by televisions, refrigerators, and many other electric appliances. Many of these modifications were made by insufficiently trained handymen, rather than experienced electricians, whose work made the wiring system vulnerable to failures, both minor and catastrophic. The photo above shows newer wiring wrapped onto an old K&T system.

Advice for those with K&T wiring:

In summary, knob-and-tube wiring is inherently less safe than modern wiring systems. Only an experienced electrical contractor can help you identify just how unsafe a particular system may be. Anyone buying, selling, or living in a structure that uses K&T wiring as part of its electrical system should be aware of the level of risk they may be dealing with. Having said that, there are no guarantees. Homes burn every day. Since no one could possibly inspect every inch of any system (behind walls, above ceilings), we cannot know for certain if a potential problem does or does not exist. So complete removal and replacement is the only method to take risk to near zero. Anything else is and improvement with some unmeasurable risk left intact.

We can provide a FREE PHONE or ON SITE CONSULTATION and a FREE ESTIMATE* of the cost to eliminate or reduce this problem. We promise no high pressure sales tactics will ever be used.

*Free estimates are restricted to those that own homes or buildings. Others may be charged a nominal fee that will be refunded if the estimated work is ordered.

How can we help? (Please call (269) 388-3110 for all emergencies) Email submissions answered the next business day.