Fuses in your home, problem or no?

The answer is complex but, decidedly yes.

I have to answer that fuse systems are less safe even though paradoxically, the fuse itself is one of the best ways to protect an electric circuit from overloads and short circuits. Those are the same two jobs that modern circuit breakers do, and fuses actually do them better.

Unfortunately, fuses come with baggage (secondary and associated problems). It is this baggage that creates safety issues and makes fuses impractical in home use, so impractical that we recommend replacement in almost every case.

What are the problems associated with fuse systems?

The photo below shows a wire that is only rated to carry 15 amps connected to a 30 amp fuse. You may notice the insulation on the wire is beginning to break down due to the heat caused by excessive current passing through it. 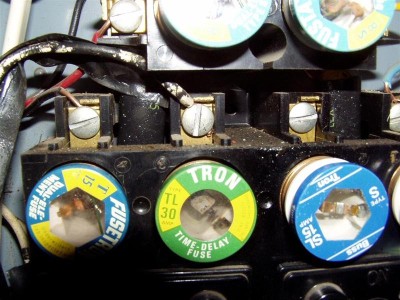 Fuse Panel? Replace it. You will never be sorry you did,  but each year many people are sorry they did not!

The bottom line is; if you live in a home equipped with fuses, are planning on buying or thinking of  selling a home equipped with a fuses, you would do well to have fuse equipment replaced. If the fuse panel is not the main electrical service but is just a sub-panel in the home, the recommendation is the same; replace it. You will never be sorry you did, but each year many people are sorry they did not.

Call for help in identifying potential hazards, have a no cost consultation, or set up a free estimate.

How can we help? (Please call (269) 388-3110 for all emergencies) Email submissions answered the next business day.